Ave Maria on a Gas Can 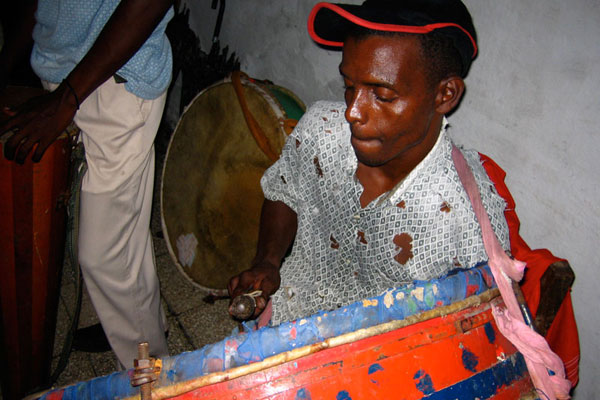 "The invasion is in the rhythm of the street," he told us. But somehow Luisito, one of the best Pilon drummers in the world, didn’t quite believe that we believed him, and he meant to show us.

There were men working underneath a car from the 30’s set up on wooden blocks, and in the gutter they’d thrown a metal gas can. Luisito grabbed the can, poured out whatever was in it, grabbed a screw driver and poked in two holes – one near the top, one near the bottom. He smiled and went in to an old woman’s house and then reappeared with a worn rope – slipped it through the openings in the can and like that had a strap for his new instrument.

He pulled a stick off a low lying tree branch and gave the red gas can a few slaps and swaps to gauge the tone. The conga is the rhythm of the barrio – he meant to show us the how of it. At the top of the street he began playing his gas can with his tree stick and as he walked a friend of his from the conga – Toto – came out into the heat and started singing old folk songs. And like that, as we walked slow, more and more folks came flowing out to follow.

People stuck their heads out windows as we walked through the dusk, and everybody in the growing group knew the words to the songs as we followed the sound through the streets of his neighborhood, watching and hearing the people get excited by the little tap rhythm coming off the hollow can. I guess it’s not what's in the can but the energy you put through the can which let's folks’ spirit fly. Listen for the kids singing in the end.