Melodius Thunk spent several years in Brazil, one of the most important sites of the African diaspora in the modern world.

In 1441 the Portuguese became the first modern Europeans to enslave Africans. And throughout the sixteenth century, they would take advantage of political instability in Africa to become the largest importers of forced laborers to the Americas. During the Portuguese occupation of Brazil (lasting until September 7, 1822), approximately 3,650,000 Africans were imported to work the sugar plantations upon which Brazil’s early colonial economy was based (compared to the estimated 427,000 brought to the U.S.). After the decline of sugar in the late 17th century, great numbers of slaves were sent to the Brazilian gold and diamond mines. Brazil officially abolished its slave traffic on Sept 28, 1850 (though illegal slave trafficking continued), and on May 13, 1888 Brazil became the last nation in the western hemisphere to officially abolish slavery. Among the Africans carried to Brazil were Afantis, Axantis, Jejes, Peuls, and Muslim Hausas (also called Malês), as well as Nago and Yoruba peoples. Each of these people carried with them their intangible culture: culinary traditions, their gods, rhythms, mannerisms and dances. Thrown together in the senzalas under conditions of unusual duress, new combinations arose. Adaptations, fusions, reactions. Influences from various parts of Africa met with indigenous traditions and those of the Europeans to produce a vibrant Afro-Brazilian culture – its most famous products: samba, capoeira, Candomblé, and the tastes of feijoada, moqueca. and acarajé.

Melodius Thunk spent time steeped in the polyrhythms of Brazil, recording street festivals, parades, and manifestations of popular religion in Bahia. Dreams and investigations of over a decade culminated in recordings of such popular festivals as the Lavagem do Bomfim, the Festa de Yemanjá, 2 de Julho (Bahia’s Independence Day), as well as special workshops on dance movements of the orixá and Silvestre technique.

Here in Bahia, they say that the shimmering trail of moonlight reflecting off the Bay of All Saints is the hair of Iemanjá. We find her represented in the form of a mermaid and also as something more akin to the Catholic saints: a morena with sensuous locks, a light blue robe that miraculously accentuates all the right curves as she hovers above the water, arms relaxed with palms open, adorned with pearls and a starfish crown. In ceremony, we find her veiled by a beaded crown, and bearing a silver abano decorated with fishes. She is called Mãe das Águas, Rainha do Mar, Dona Janaína and Iara among other names. Her sacred choreography resembles the undulating movement of slow roller waves, with a lofty grace at the surface and a deep, knees-bent power to suck you fast below. She is associated with Nossa Senhora da Conceição da Praia, the patron saint of Bahia celebrated on the eighth of December in the Cidade Baixa (Lower City) of Salvador. And with Nossa Senhora dos Navegantes on the second of February in what has become a massive festival falling just between the Lavagem do Bomfim and Carnaval. Throughout Brazil, Iemanjá is honored on New Year’s Eve as well — most famously in Rio, but in Bahia too — when the faithful dressed in white light candles for her on the beach or toss offerings of flowers into the water and jump over seven waves at the strike of midnight for good luck in the new year.

In this city of sound, an important port of entry for understanding contemporary manifestations of and for Iemanjá are the waves of sound created as she rolls out along the streets. This piece is a sonic portrait with photos of the Festa de Iemanjá held each year on the second of February in the Rio Vermelho neighborhood of Salvador, Bahia.

During the 2010 festival, we accompanied the Filhos de Gandhy, Bahia’s largest Afoxé bloco. The Afoxés have been referred to as the Candomblé of the street for their adaptations of the Candomblé rhythm in the secular context. Their signature sound is an inversion of the Ijexá rhythm, one of the rhythms played in the Candomblé for Iemanjá, among other orixás. In the secular context, the rhythm remains the same, while the high and low notes are swapped. It is played on the agogô—or the gã in the sacred context.

We followed the Filhos’ ritual and subsequent departure from their headquarters in the Pelourinho and then captured the culminating moment as they reached the beach in procession at sunset when the great float of gifts honoring Iemanjá was towed out to the open sea. Men dressed all in white with their terrycloth turbans belted out songs to the driving big drum beats. One hears the rhythm of the Afoxé, almost trance-inducing, and those who listen carefully will hear the beat of Iemanjá herself—the ocean lapping in the foreground.

In 2011, rather than focus on one group, we opted to record the sound of festival as a whole, sensory event. The resulting audio and images highlight the unproblematic union of sacred and profane that characterizes the festival. Sound recordings capture intersections of brass bands with trio elétricos and afoxés in a semi-spontaneous aural montage, all with the sounds of the streets of Salvador in high festival mode: the energy of the crowd, the sizzling of grilling meats, the calls of drink sellers, the sudden popping of fireworks—everything but the smells of steamy piss and sweetened popcorn on the salt air. We experience the process of the festival from preparations the evening prior when people begin to leave their gifts—flowers, mirrors, soaps, and even dolls—in the great baskets arranged outside the Casa de Iemanjá. We see the sellers of perfume and trinkets intended as gifts for the goddess of the sea and as souvenirs too. Then come daytime, women squeezed into their baby blue tube tops guzzling Skols in the summer heat, and the polyrhythm of unrehearsed encounters: bodies, acarajé, exuberant sound makers, and the fishermen with their wooden boats for whom every day is a day of Iemanjá.

Images and audio from the 2012 festival highlight the space of the festival, an homage to the sea that becomes a throng of bodies moving between street and sand, and of all behaviors sacred, profane and mundane. In the street, persons of all ages, genders, classes and religious affiliations wait in a cue blocks long to place their offerings in the baskets near the Casa de Iemanjá. Others came the previous night, or just before dawn. Some forego the cue and toss their flowers directly into the sea from the beach. Streets lined with vendors fill with passing bands, drinking revelers and litter over the course of the day. On the sandy beach below, we see the growing float bearing the great baskets of gifts and flowers. Various Candomblé houses raise a shade tent or temporary altar where passersby may receive a blessing for a small donation. This year, rougher waters thrill frolicking children and send little boats teetering into a beach break. I spot Ogun in an orange life jacket! Today, the beginning of a police strike in Bahia has folks cutting out of work early fearing violence, looting, assaults on busses and the traffic that comes with it all. But the party continues in Rio Vermelho. At the water’s edge a woman enters an ecstatic trance, while up on the hill a toasting reggae DJ pauses to sing along with a passing marching band. 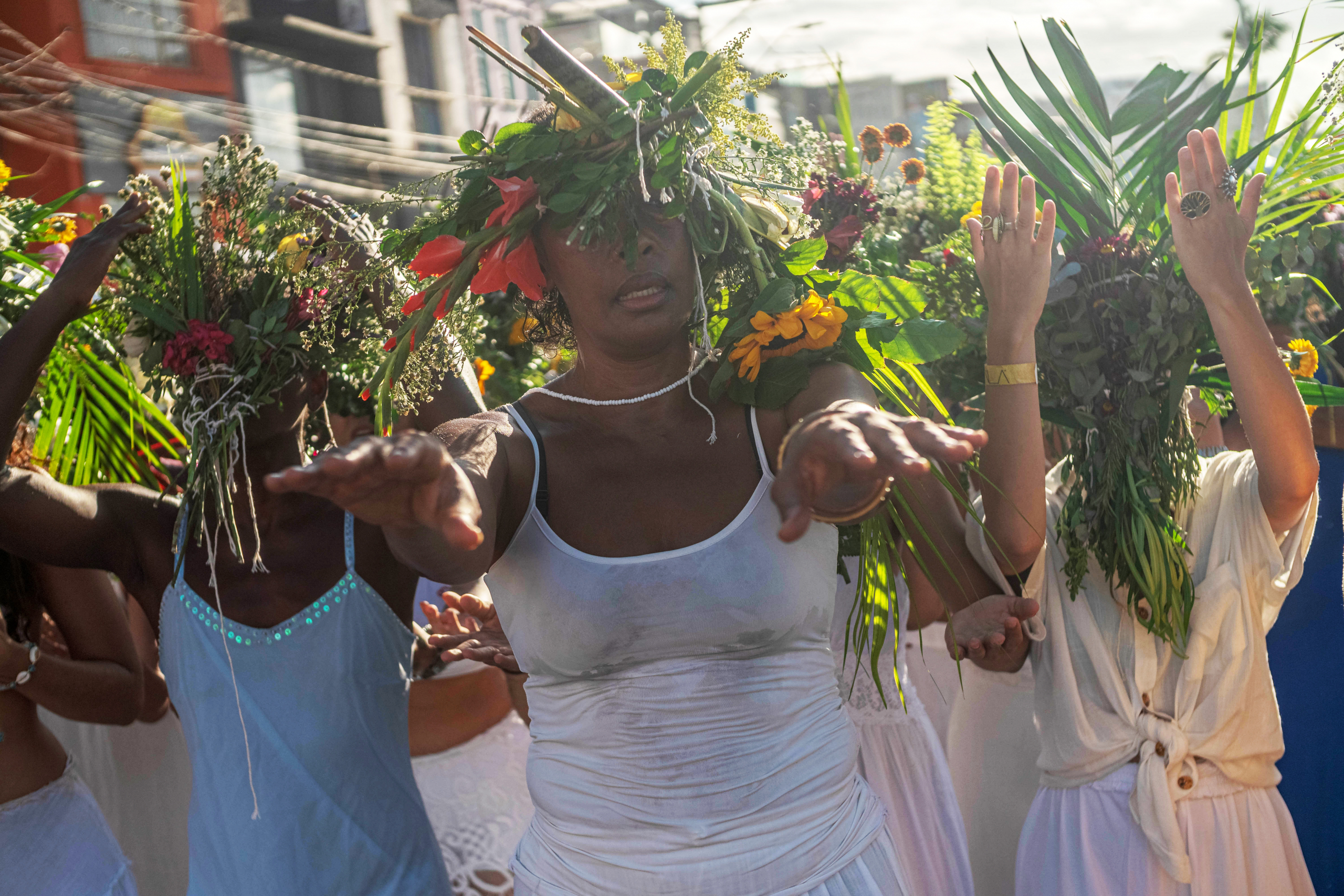 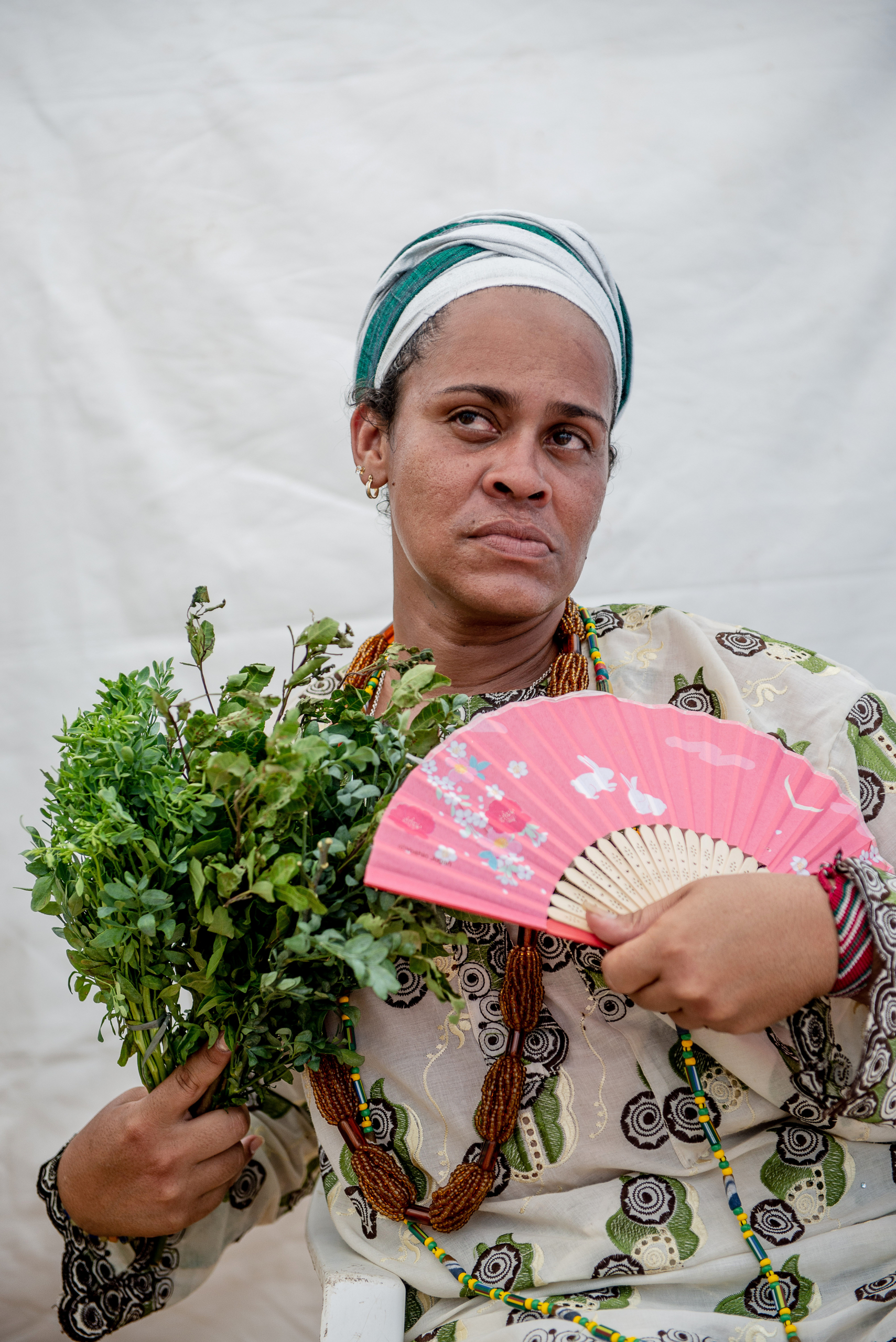 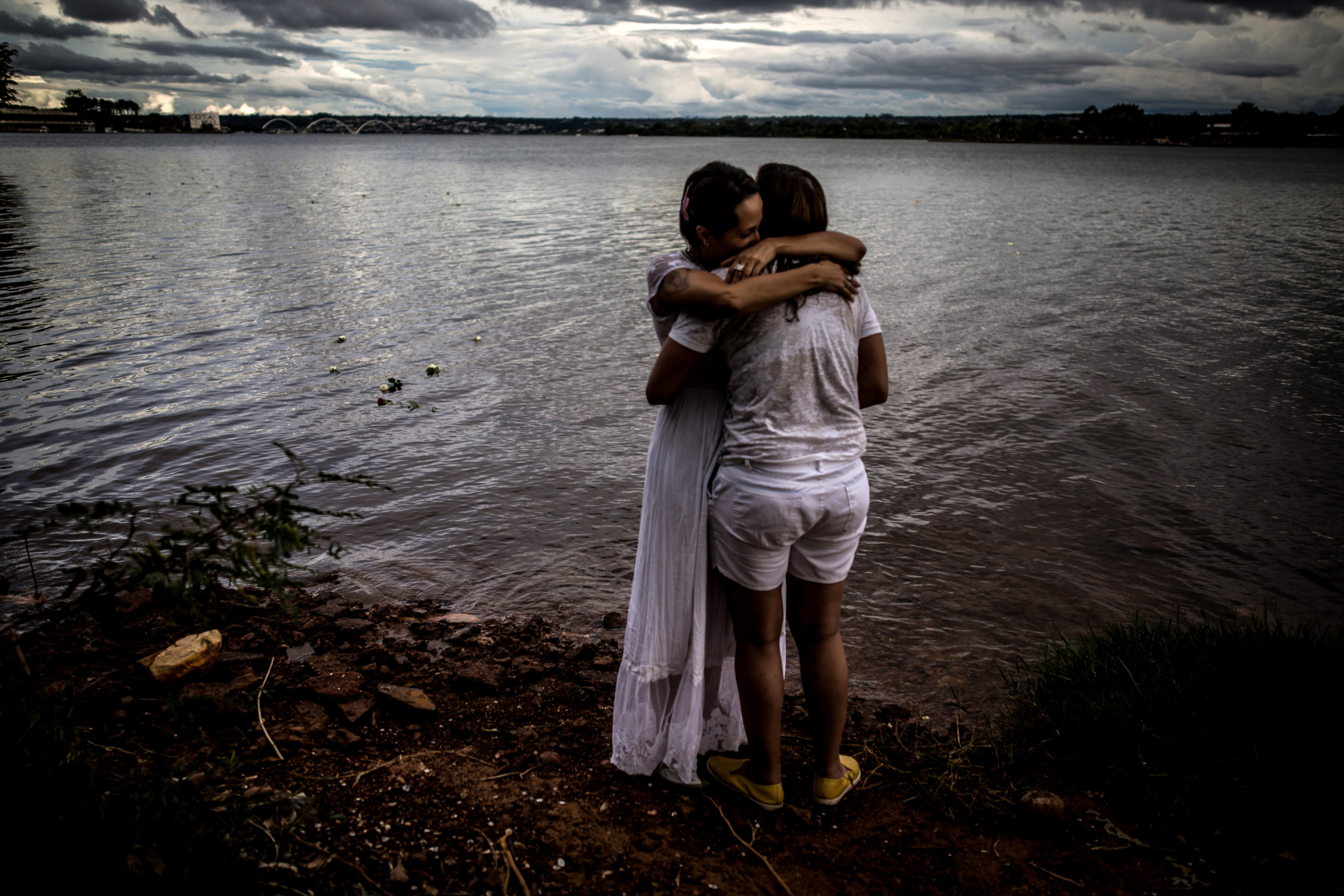 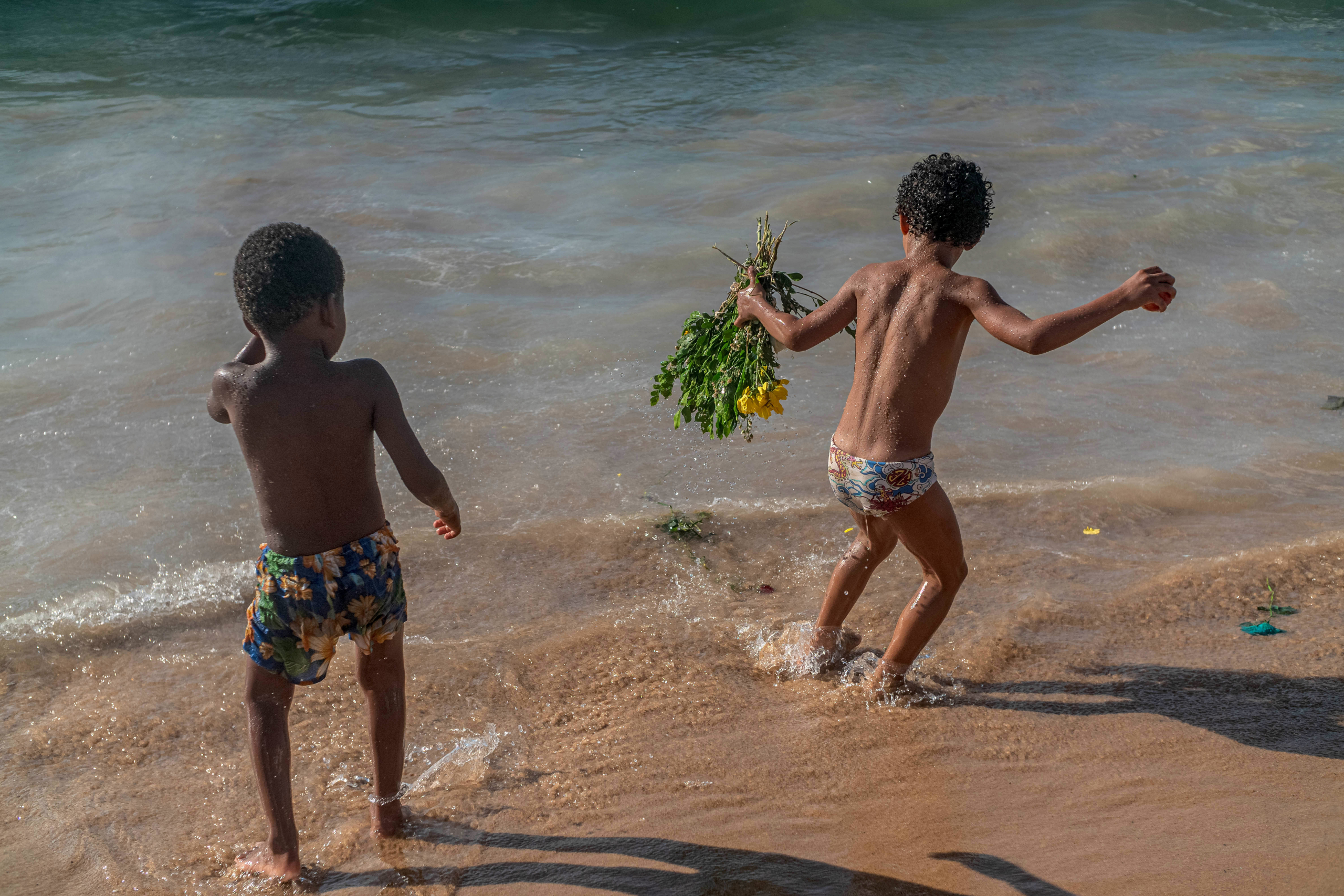 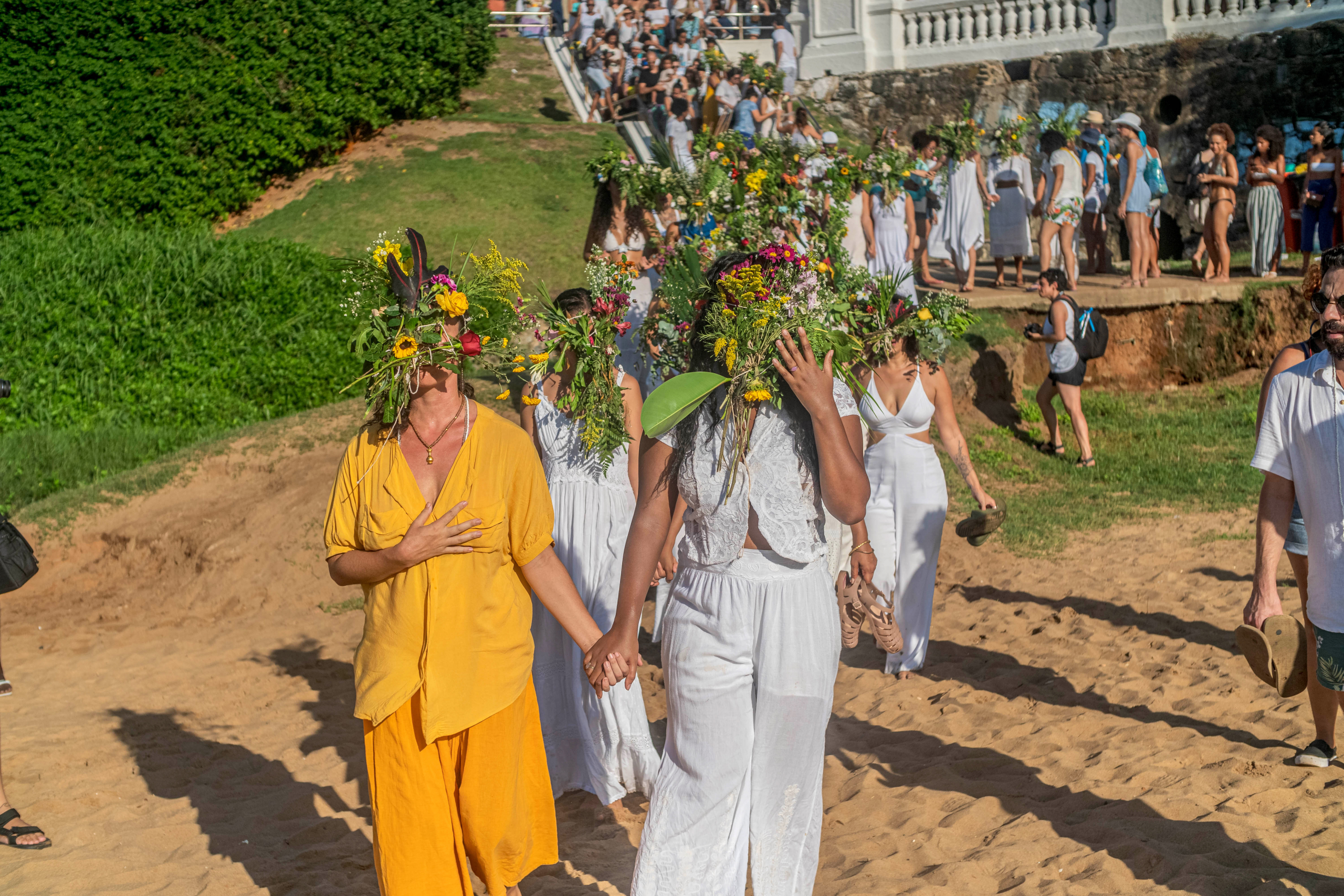 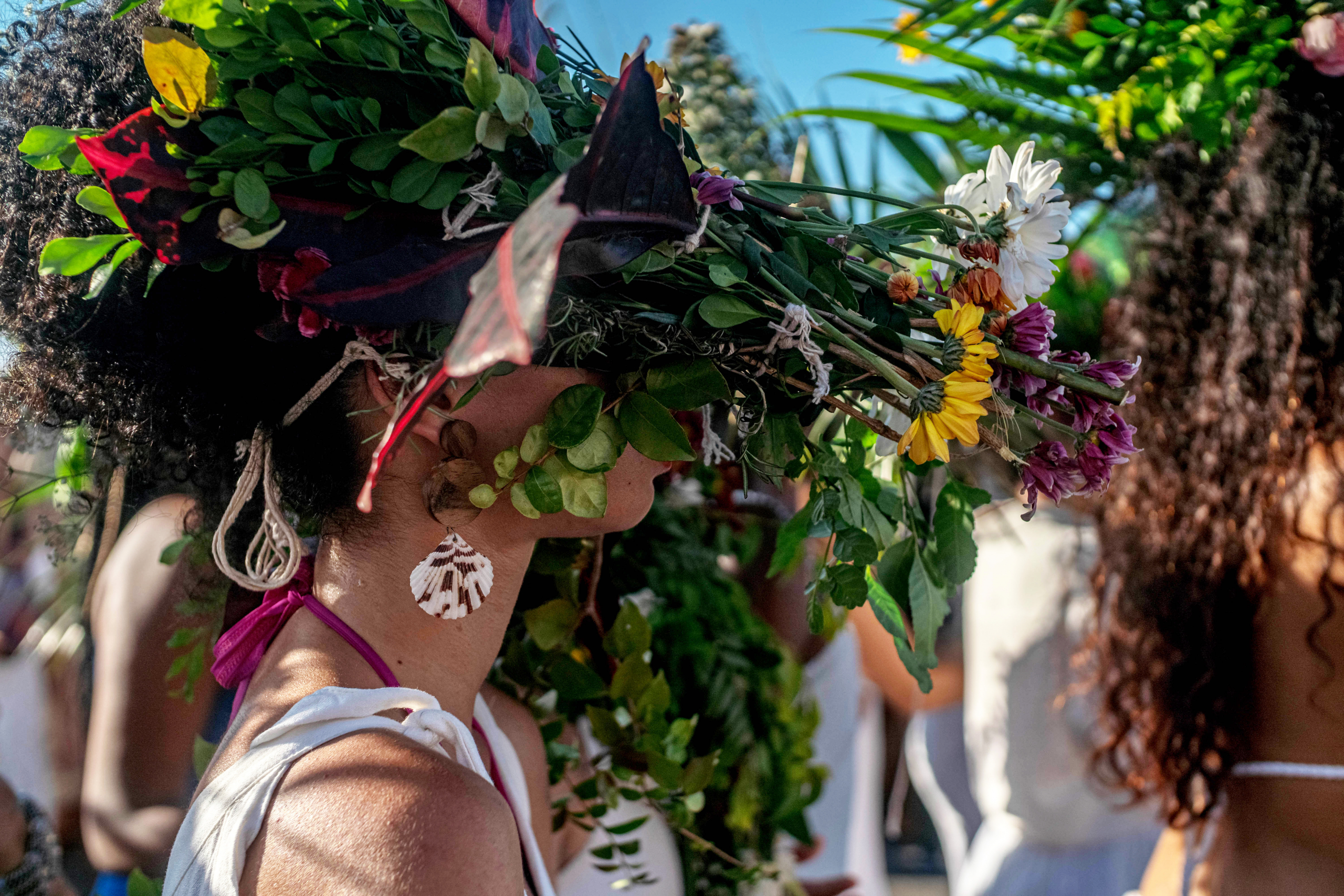 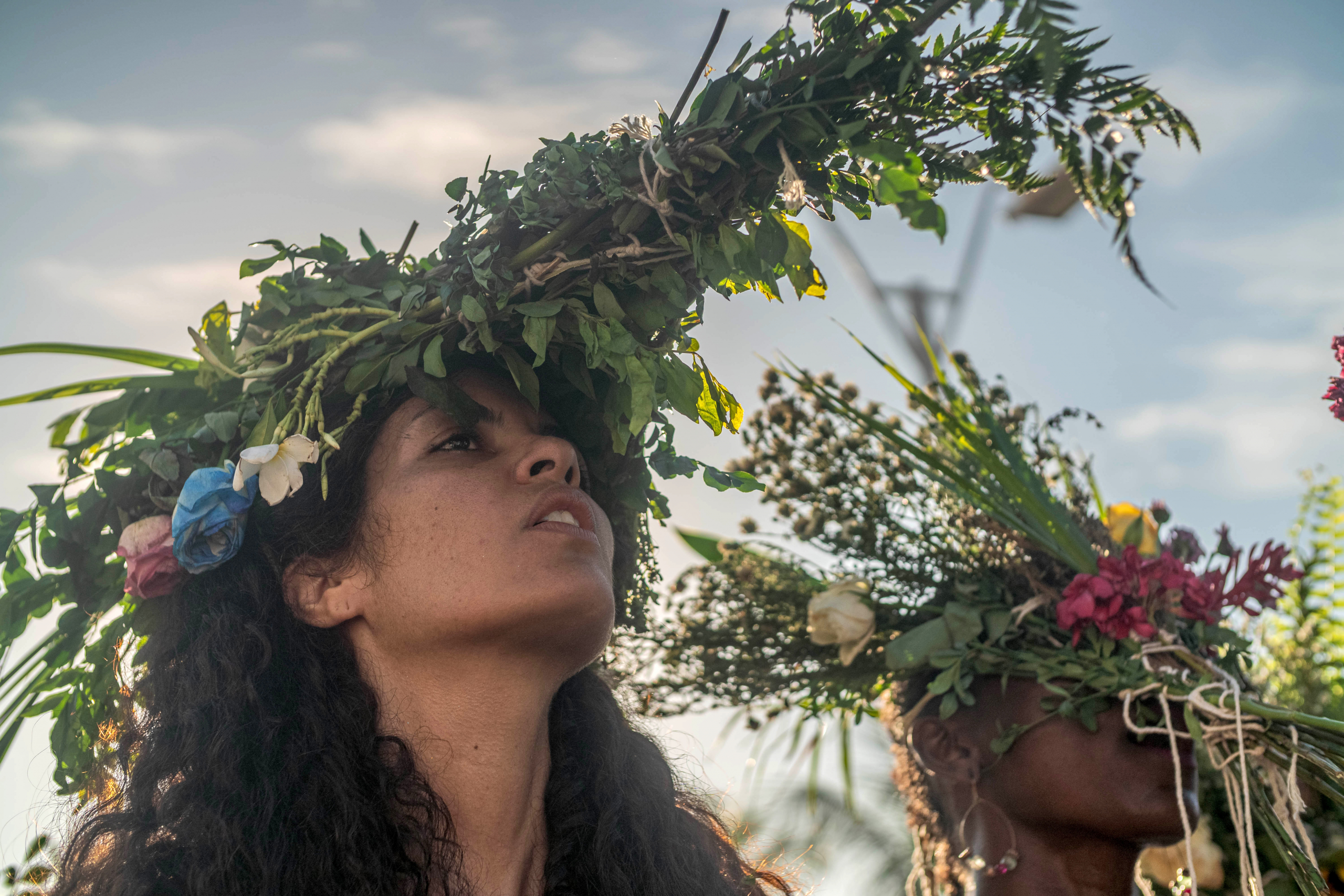 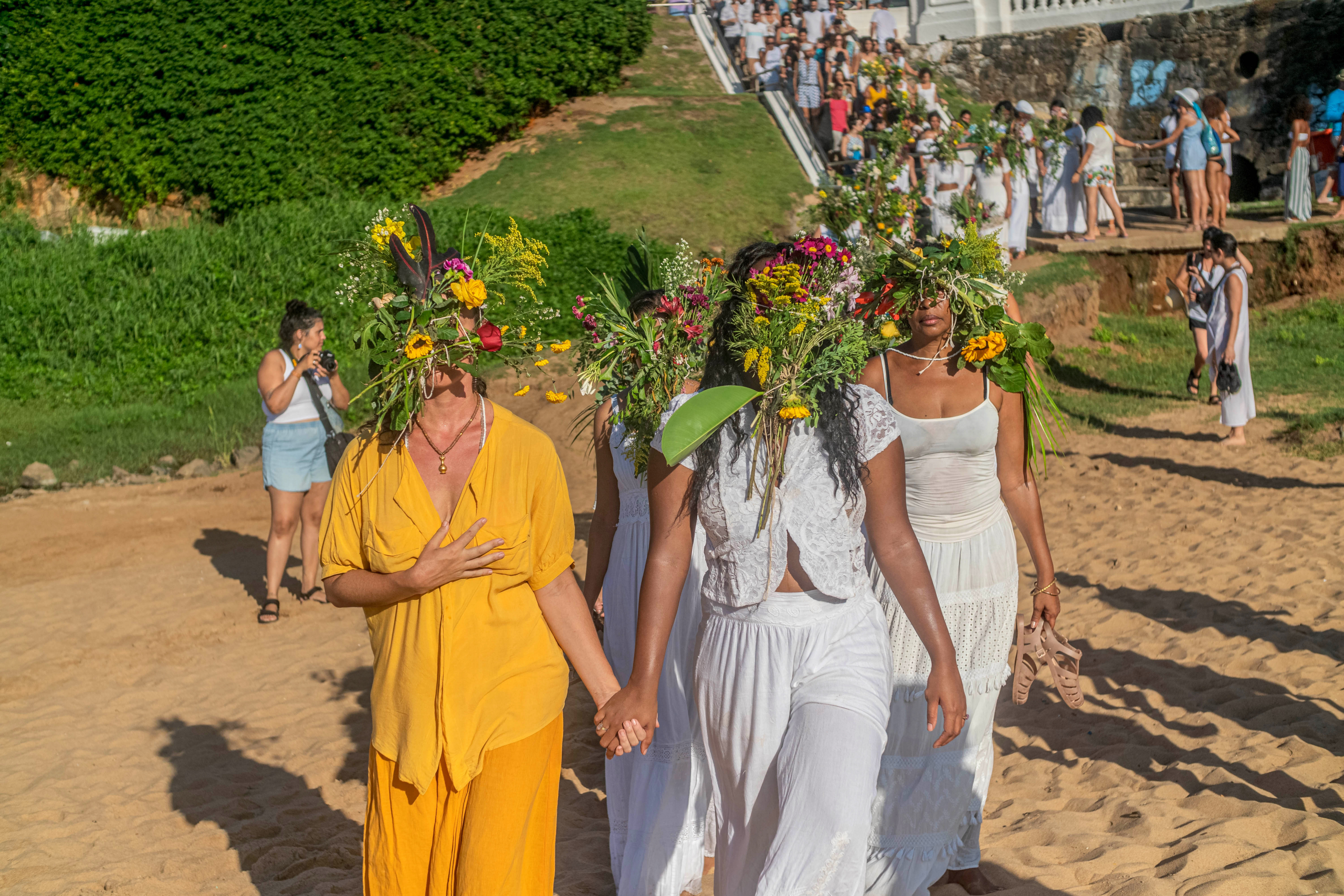 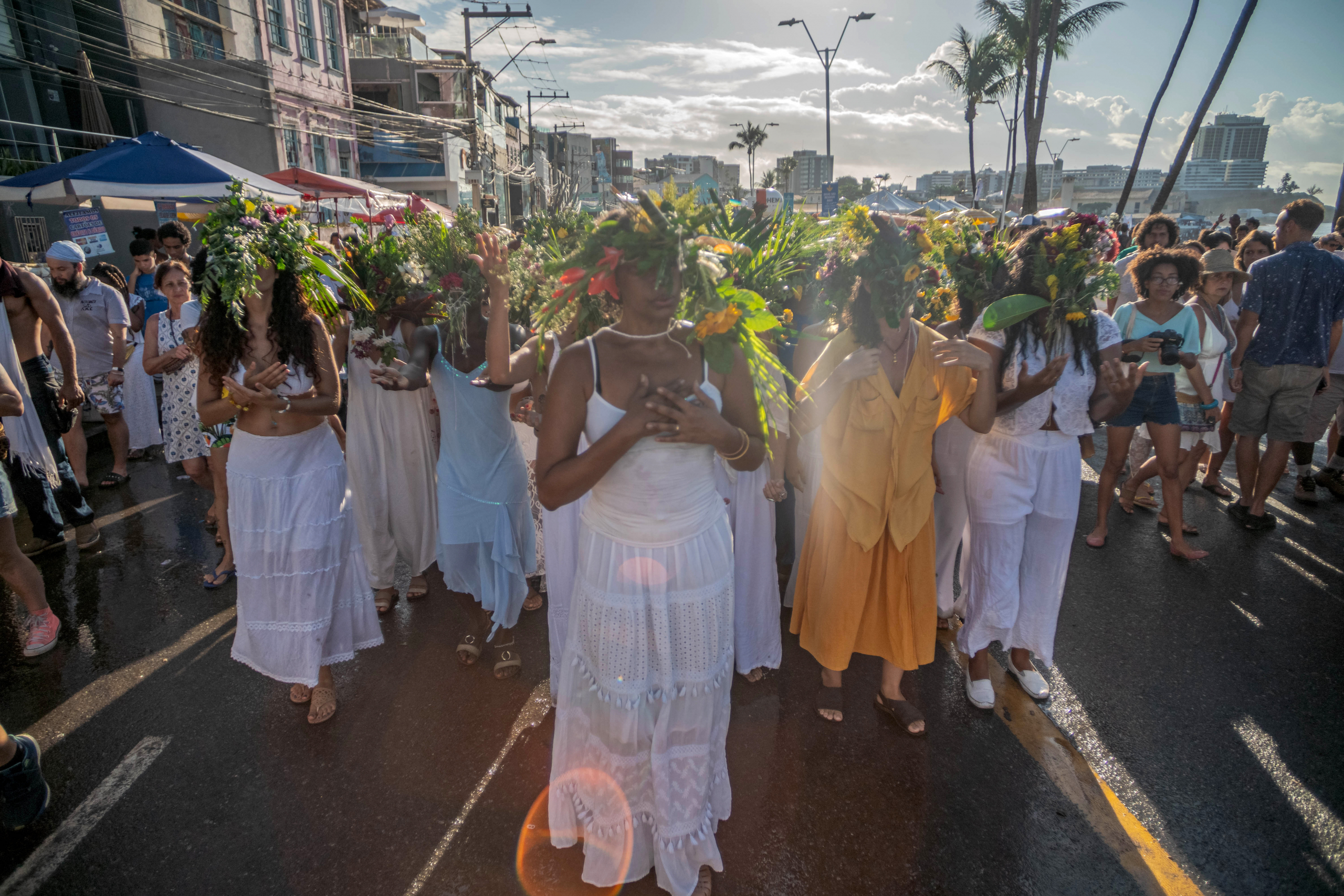 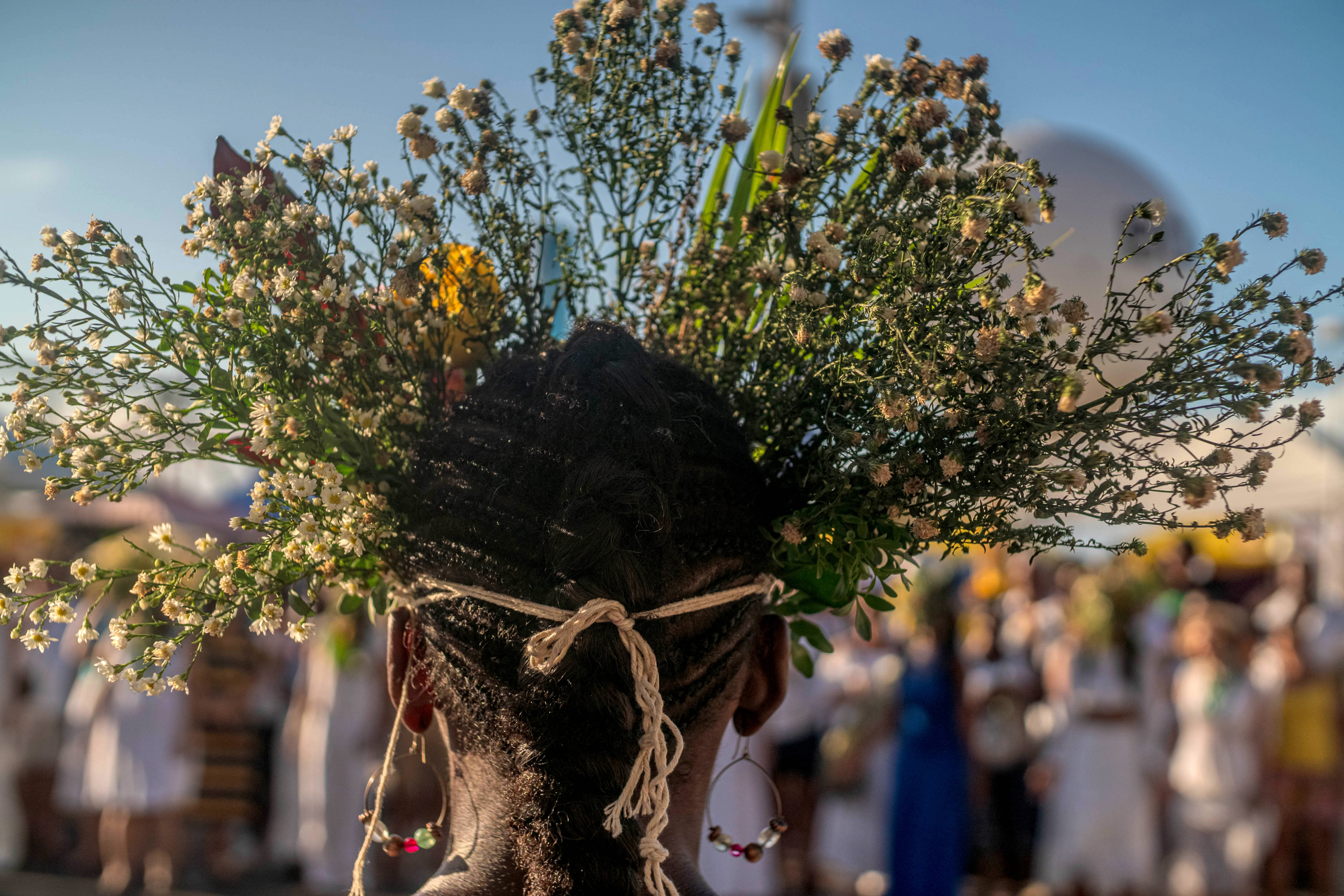 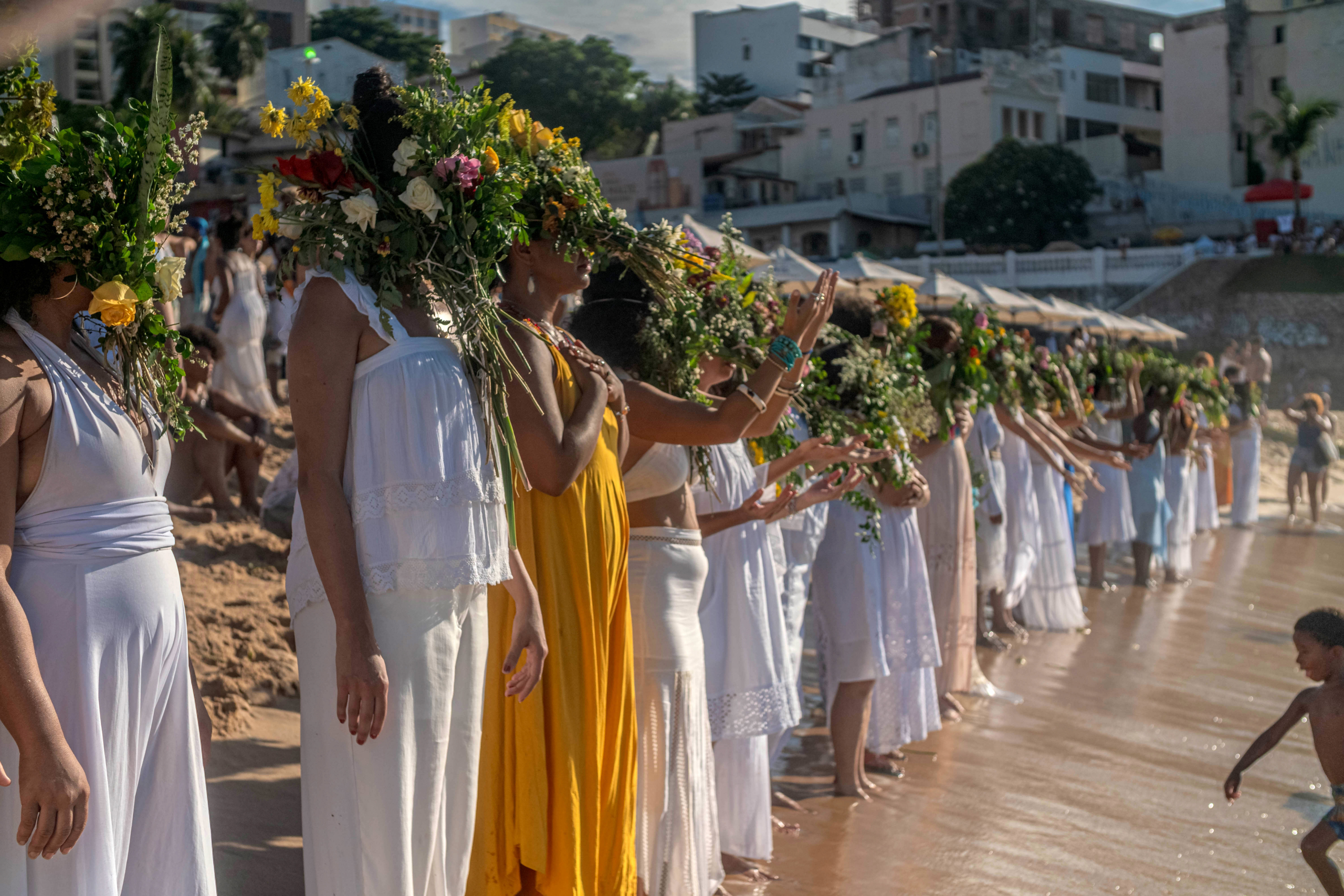 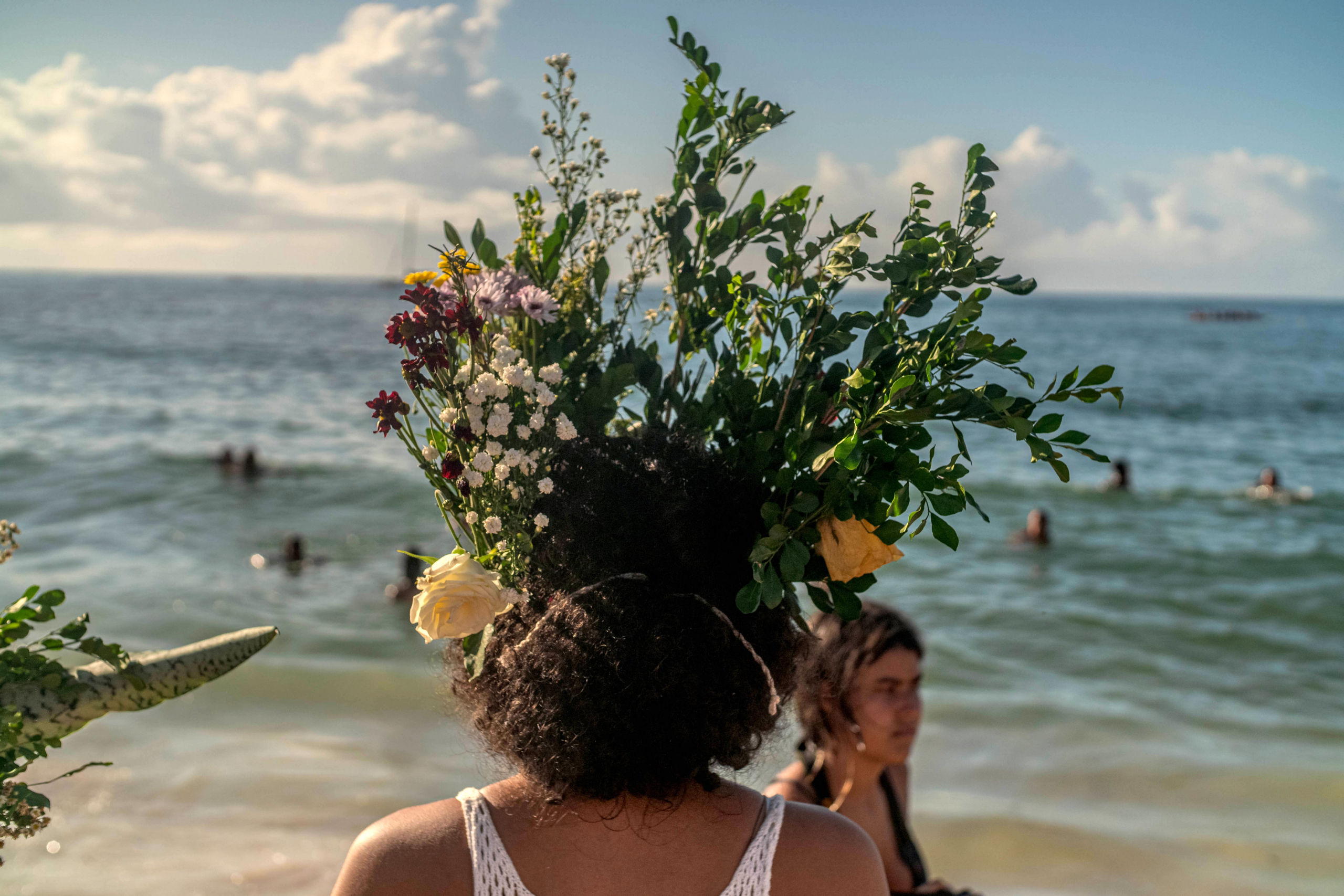 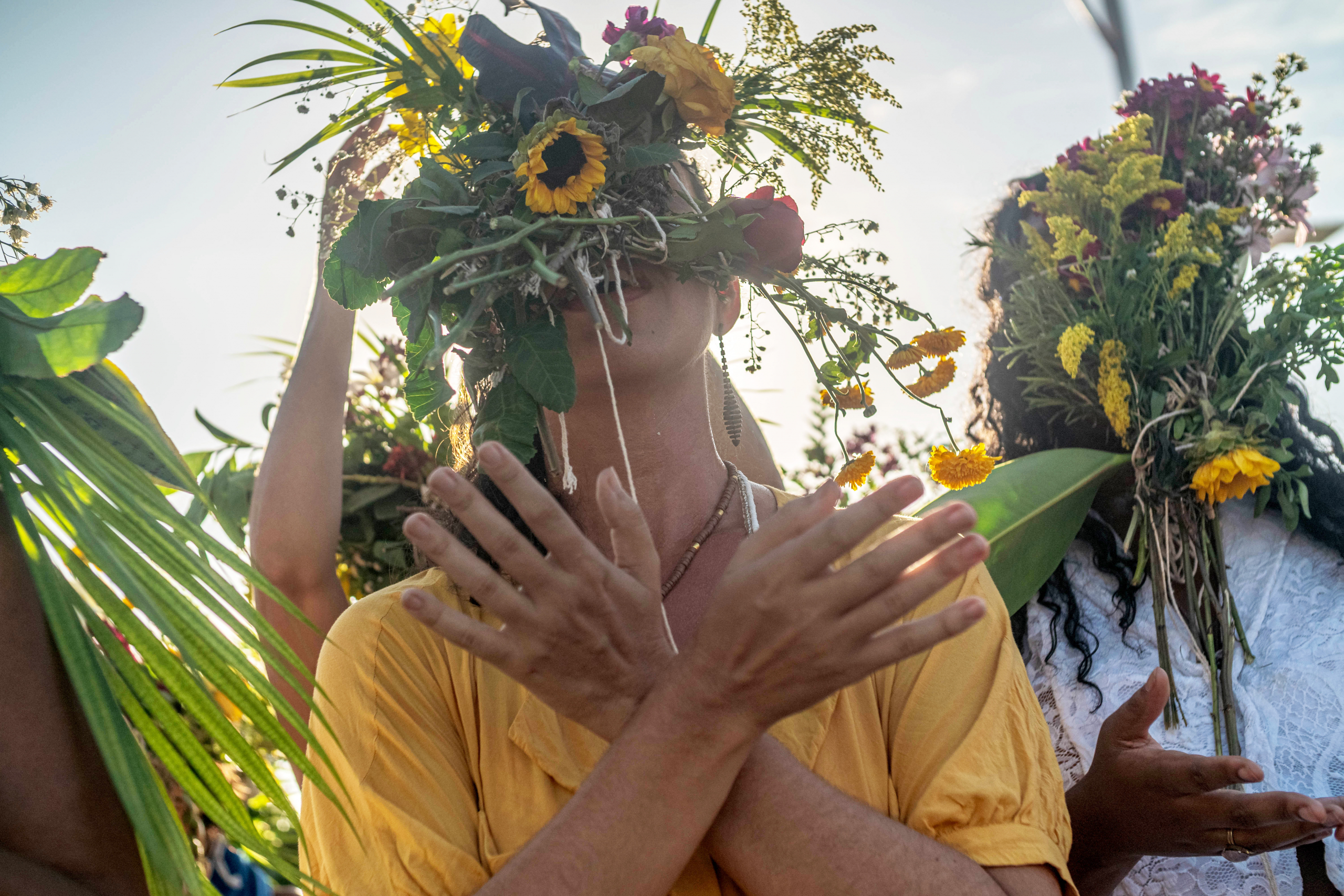 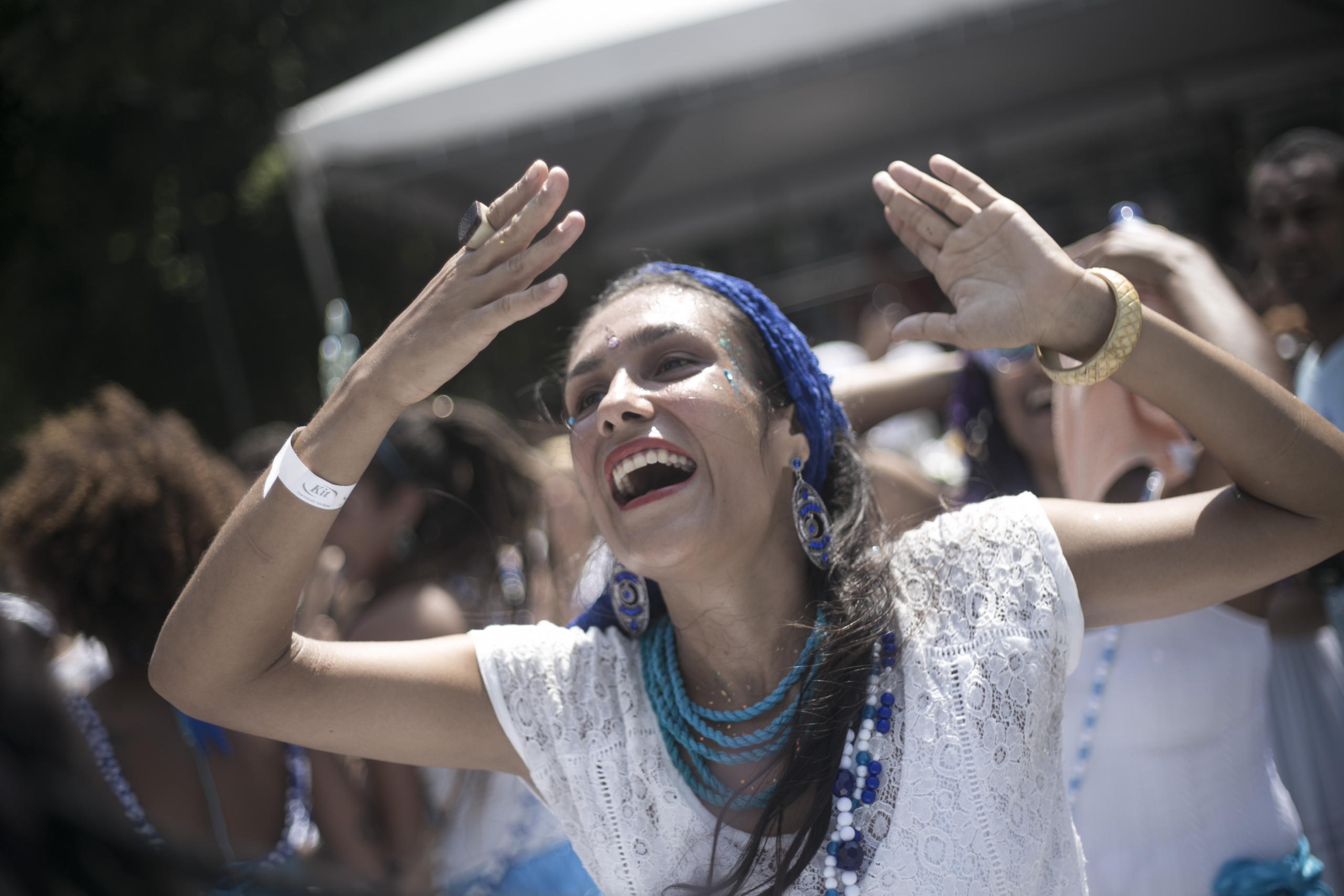 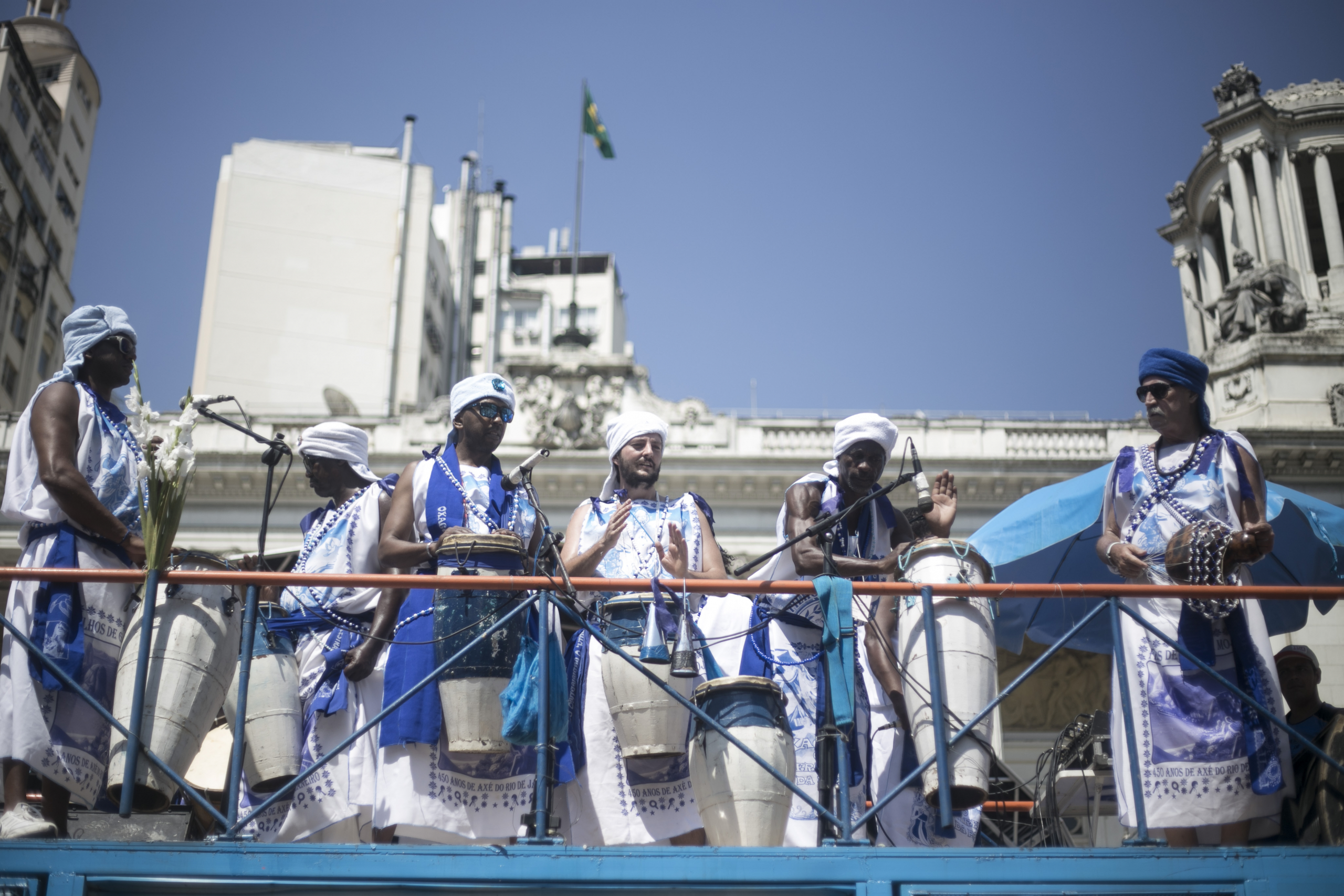 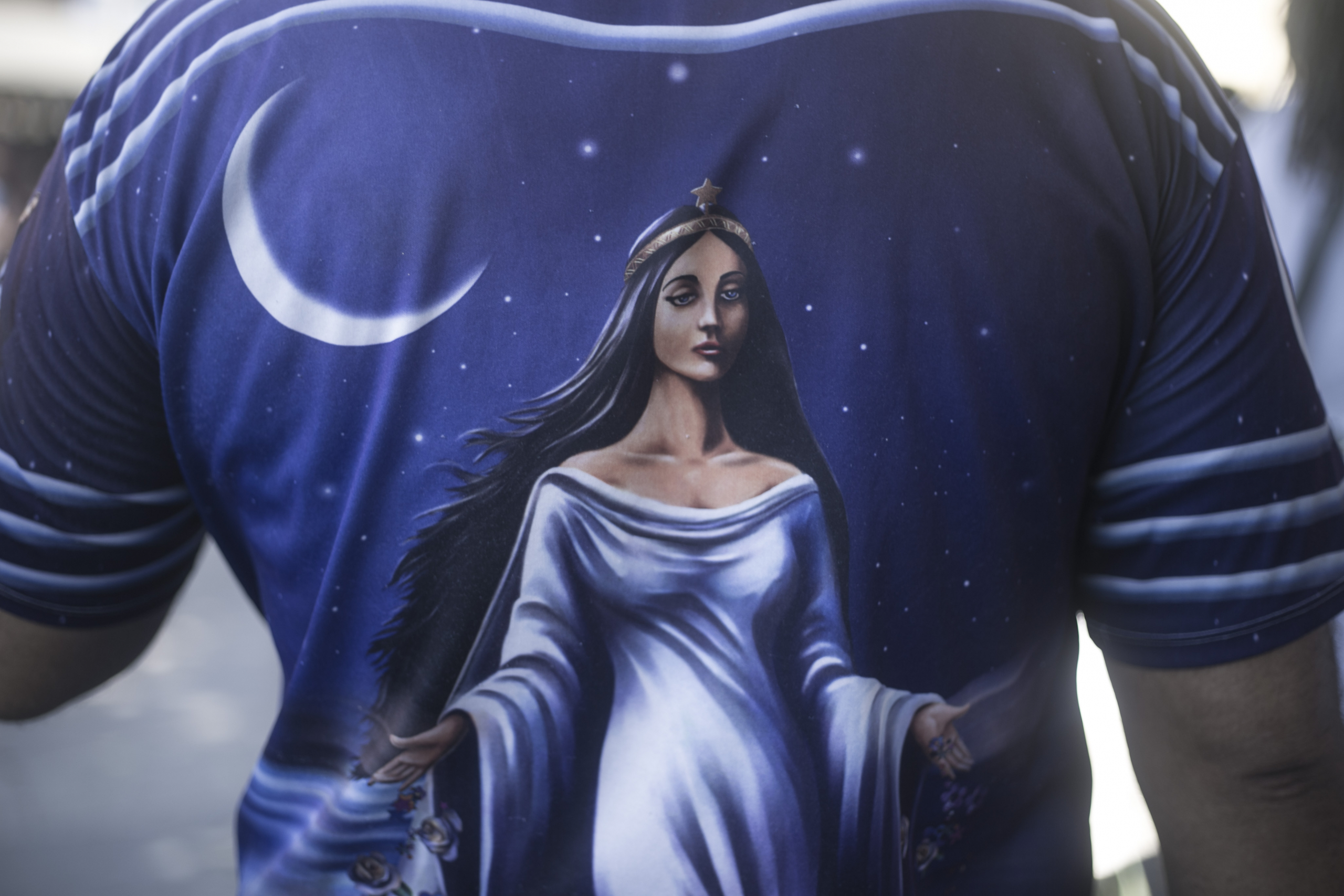 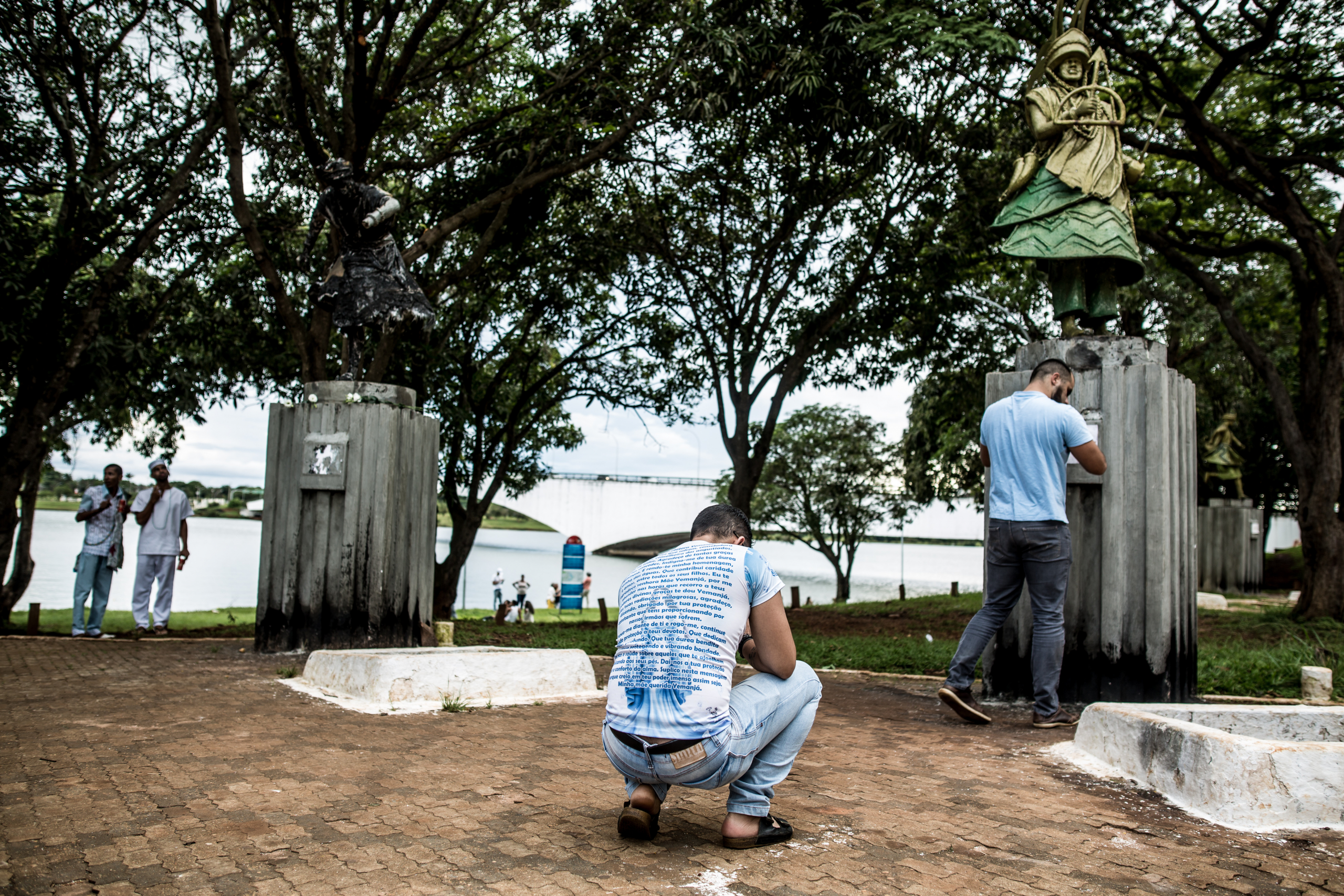 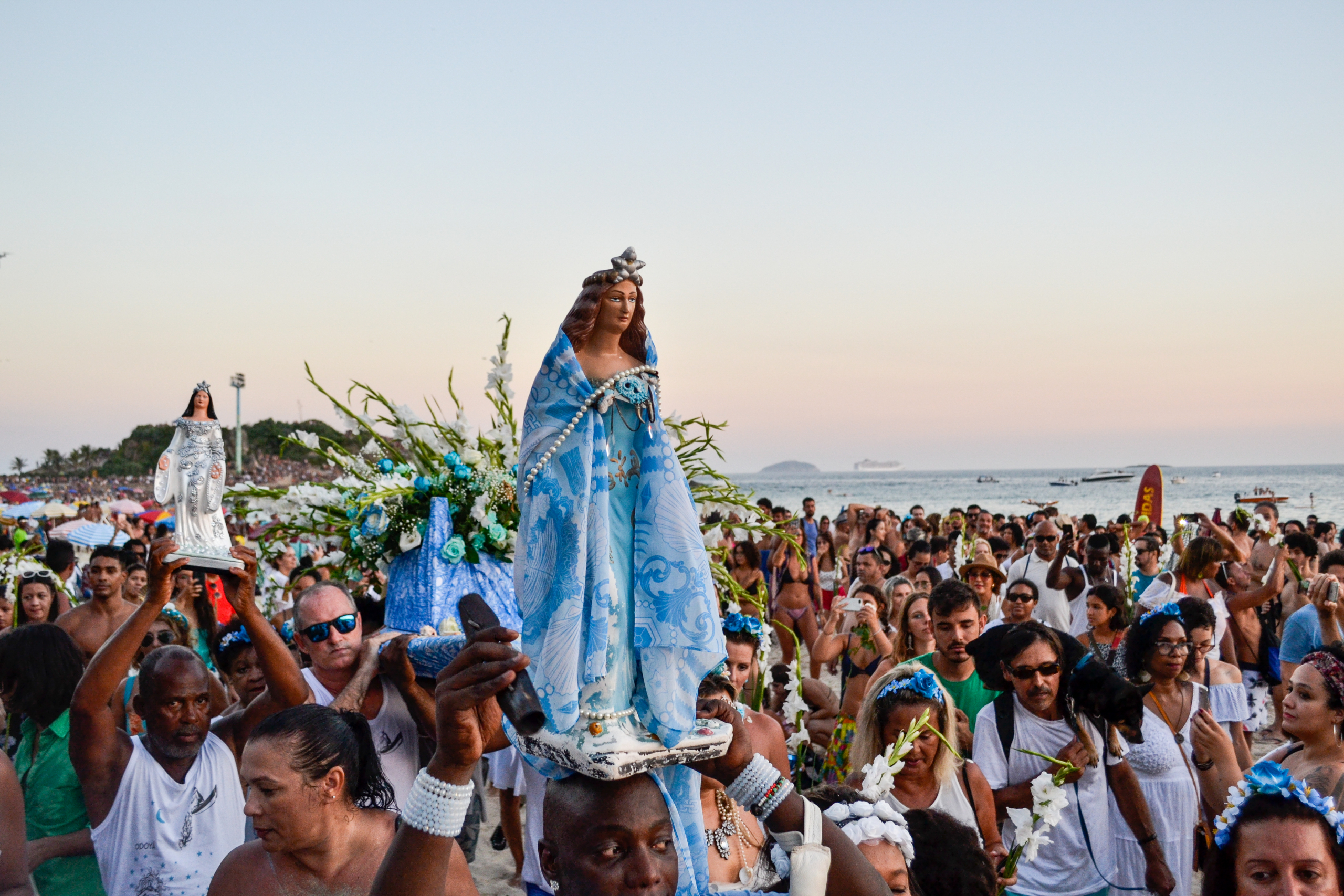 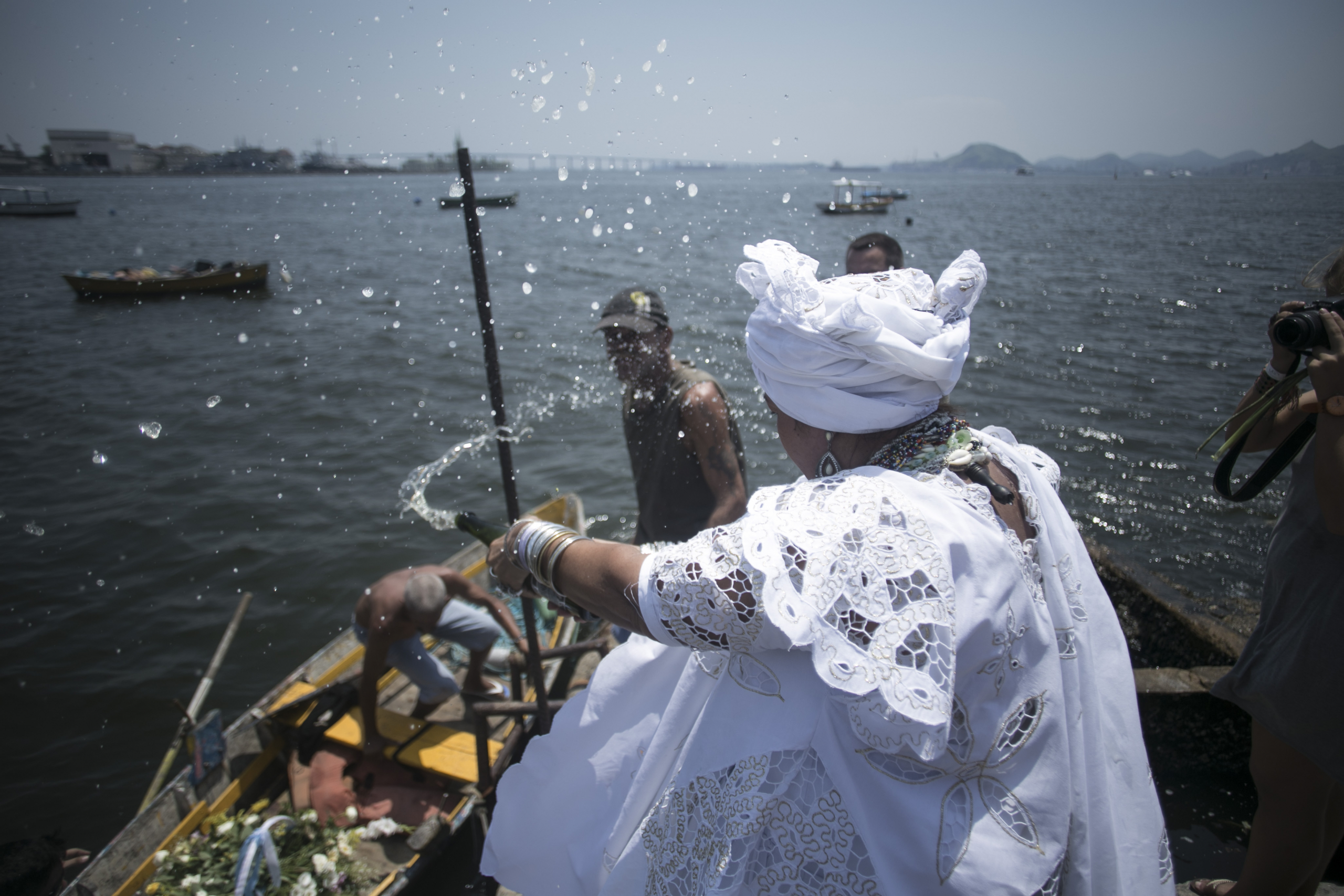 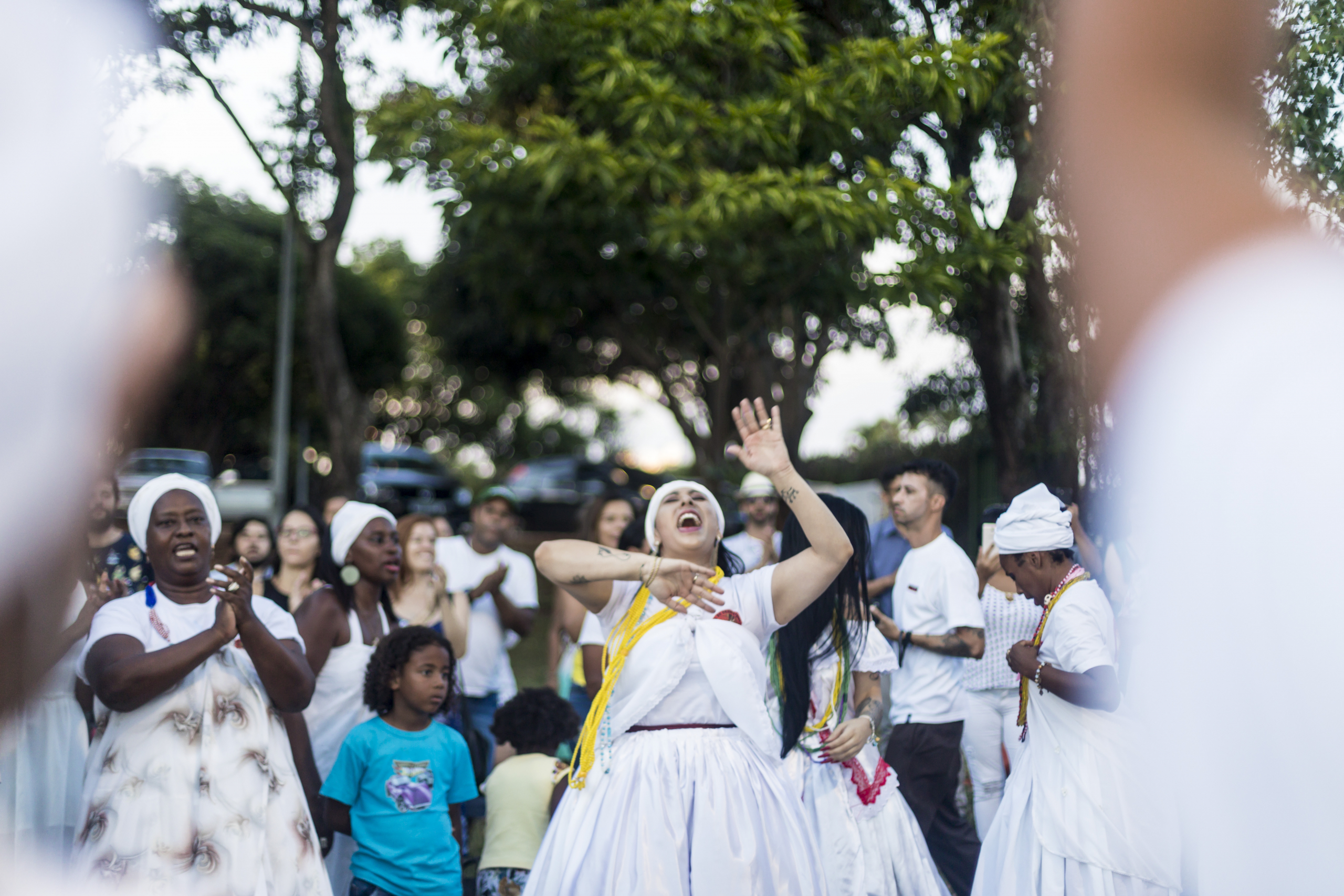 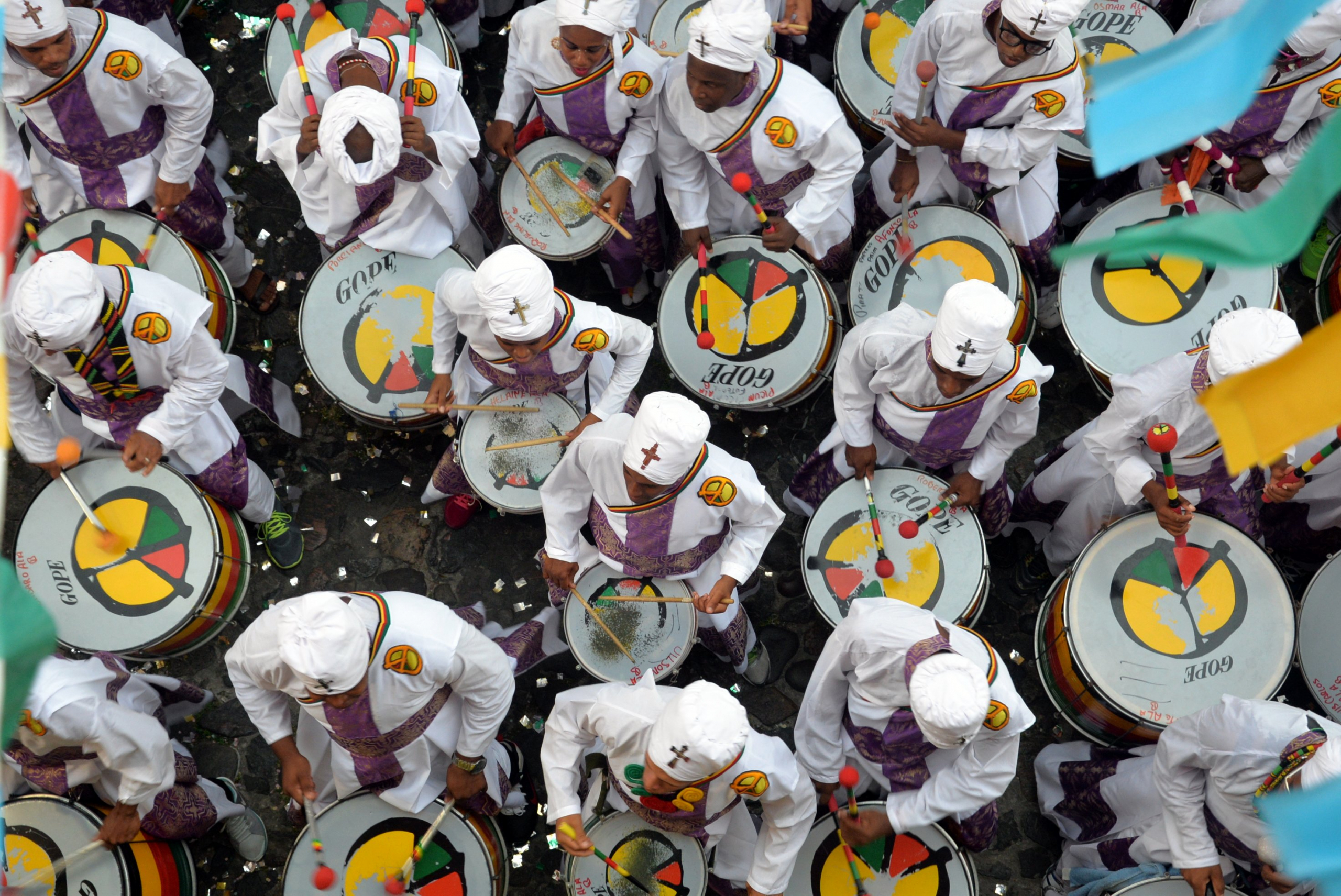 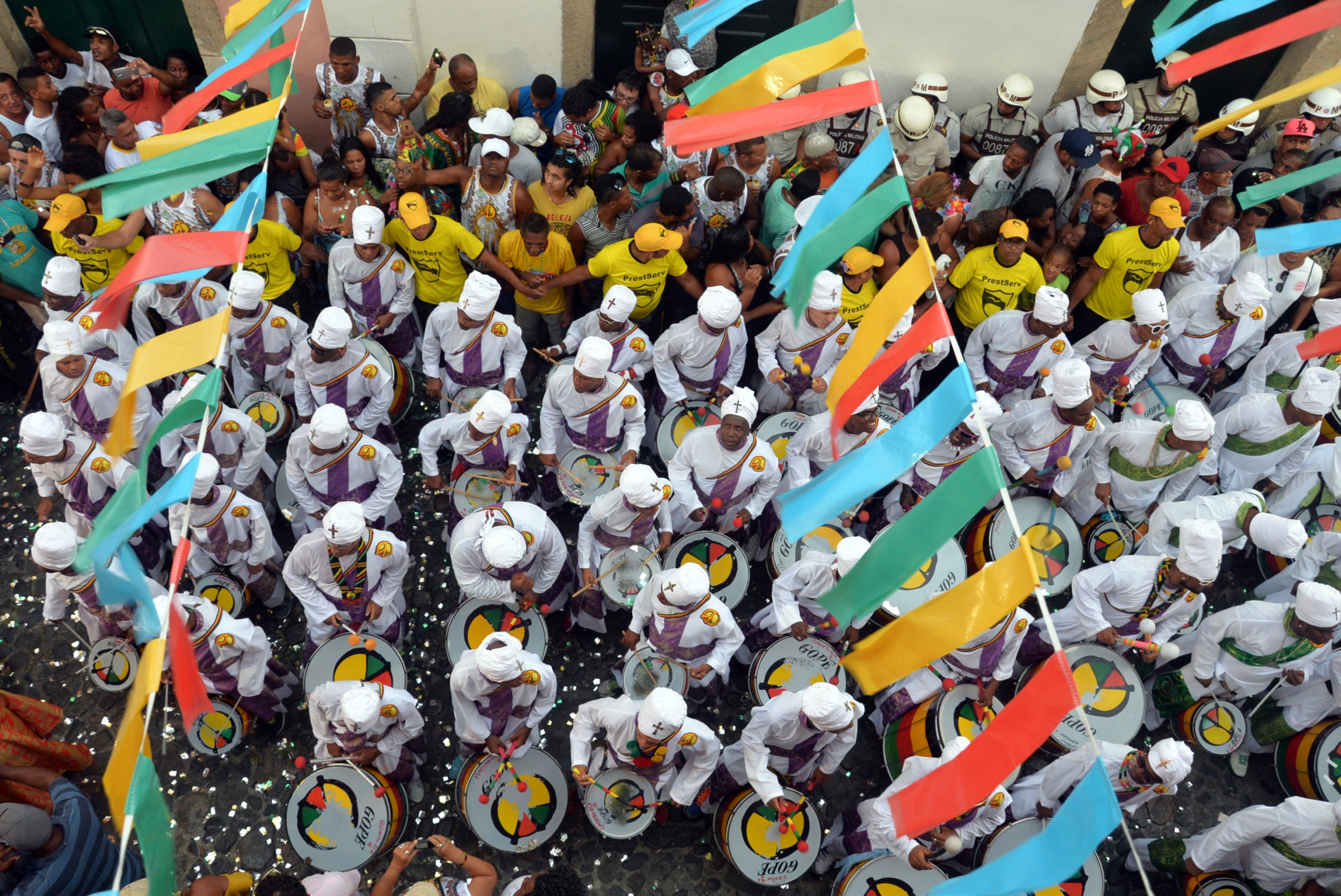